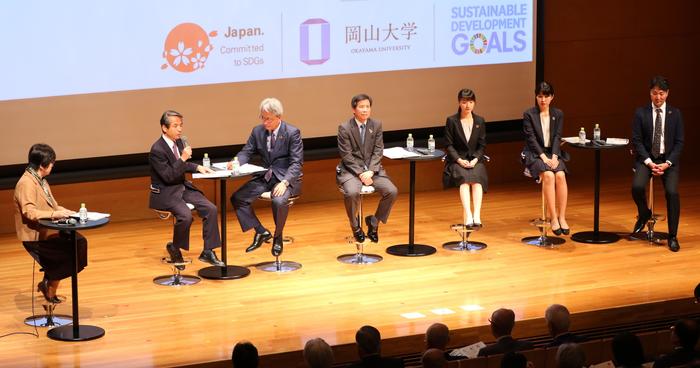 On October 26, Okayama University, celebrating the 70th anniversary of its foundation this year, released Okayama University Integrated Report 2019 - Pay it Forward. This was the first time that we issued an integrated report, which was intended to explain how "an organization creates value over time" (quoted from the International Integrated Reporting Framework; International Integrated Reporting Council [IIRC]). Featuring an organic integration of our vision and the combination of financial information and other information, our integrated report presented a review of our past achievements and results, and explained our future vision in an easy-to-understand manner.

On the same day when the report was released, we held the Okayama University Integrated Reporting Forum 2019 at the 50th Anniversary T. Kanemitsu Hall. The event attracted approximately 200 participants, including alumni and students of the university, high school students in Okayama Prefecture, those from other universities and companies, and local residents.

President MAKINO Hirofumi delivered an opening address, explaining the university's firm determination to "Pay it Forward." He declared that the university will ensure that the integrated report leads to the sharing, empathy, and cooperation with people both inside and outside the university. Moreover, while looking back on the steps taken so far by the university, he described the efforts made as of AY 2019, the first year for the university's management with emphasis on the SDGs, and released the Okayama University Vision 2.0 as a new scheme for the future.

This was followed by a panel discussion with the theme "What Is Value Created by a University Managed with Emphasis on the SDGs?" Invited as panelists for the discussion were alumni of the university who are presently demonstrating the leadership at a company and a government. Together with them, a faculty member, a staff member, and a student of the university also engaged in the discussion. Managing Officer KAWATA Takashi of Shimizu Corporation referred to the university's Faculty of Engineering, which will be reformed drastically in academic year 2021, stating that the reformation would fit with the times very much. He also commented "It is sometimes hard to study at university, but I hope that the university will provide education in which students can find pleasure comfortably." Meanwhile, Vice Governor SATO Kenro of Okayama Prefecture praised the spirit of Okayama University as one of only a dozen of universities in the world to prepare an integrated report. He said that the report was considerably significant not only in terms of disclosure to the outside, but also in terms of the sharing of the awareness inside the university. In addition, Ms. ONO Sakura, a sophomore of the Faculty of Science and representative of the members of Okayama University Future Session, Ms. HAMADA Maho, a clerical staff member of the Academic Planning Section of the Academic Affairs Department, and Assistant Prof. KOYAMA Toshihiro of the Graduate School of Medicine, Dentistry and Pharmaceutical Sciences presented specific proposals regarding the management of the university, respectively from the perspective of students, university staff, and faculty members. Such proposals included providing a practice-based class in which students think of the SDGs from the point of view that they are the key player. Thus, a wide variety of opinions were exchanged in the panel discussion.

In the Q&A session, high school students and other audience members from other universities also advanced their opinions actively. For example, Ms. AOKI Shiho, Manager of Institutional Reseach Group of Management Planning Department, The University of Tokyo, which prepared an integrated report in 2018 for the first time in the history of the universities in Japan, stated that the concept "Pay it Forward" and Okayama University's four processes for earning trust from society by taking advantage of the university's knowledge resources were simple and persuasive. She also gave advice that if specific stakeholders were involved in the integrated report from the perspective of the cooperation with stakeholders, the report would further deepen readers' empathy.

In conclusion, Managing Officer KAWATA Takashi and Vice Governor SATO Kenro commented from the standpoint of alumni of the university. They respectively stated with expectation "I hope Okayama University will serve as the core for the industry-government-academia cooperation" and "I hope that the university will have an impact on the world with its eyes set on Japanese aging population with a falling birthrate." The panel discussion concluded with the review by the forum facilitator TAKAHASHI Kayo, the university's Executive Director for Planning and General Affairs and Director of the IR/IE Office, saying "We would like to carry out activities that will make impact in cooperation with all of you based not on the general catchphrase like "from the region to the world," but on the catchphrase "from Okayama to the world." 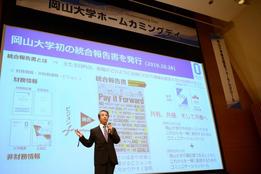 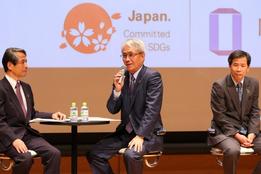 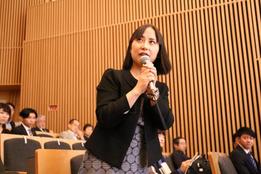