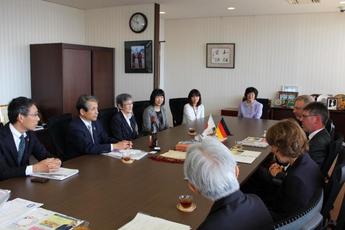 The Trier University is located in Trier, called the oldest German city. In February 2016, the university concluded a faculty-level exchange agreement with the Faculty of Letters of Okayama University, leading to an annual exchange of a few students. The German universities including Trier University are enthusiastic about issues related to the SDGs, such as sustainability and fair trade. It is expected that our interaction will be further developed in the future. 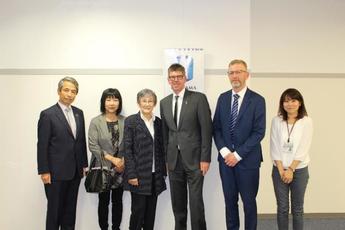 On the same day as the visit, the family of Ms. AYANO Mutsuko, a graduate of Okayama University who was involved in an incident and passed away while studying at the Trier University, met the president of the university. The family stated that they were grateful to see the president, with the meeting arranged as the result of a long chain of connections. Since the incident, a memorial monument has been erected in Trier, and one of the city's streets has been renamed "Mutsuko." Although more than 35 years have passed since the tragedy, the memory of Mutsuko has been handed down to the people of Trier.