From December 2019 to January 2020, as a joint project of NUT and Mitsuke City which has been selected as an "SDGs Future City" by the Cabinet Office, NUT conducted an exemplary class at Tai Elementary School in Mitsuke City to provide opportunities to learn and practice the SDGs through programming education taught by NUT's graduate student, and this project was featured on the United Nations website.

This new initiative, which aims to achieve two educational objectives, cultivating logical thinking skills through programming education and cultivating awareness of the SDGs, has been well received by many educators in Mitsuke City and elsewhere.

Furthermore, this initiative attracted the attention of UN officials who are collecting information on SDGs activities around the world. It is entitled "Early Start on the SDGs: School Children Learn the Importance of Sustainability" and posted by of United Nations Academic Impact (UNAI) website.

NUT has appointed as the only one UNAI SDG9 Hub University in the world, and has been promoting the SDGs in the society and the region to lead awareness and raise activities. This is a great honor to have NUT's efforts featured in the article on the UN website.

NUT will continue to work with the local community and local governments to promote efforts to increase understanding of the SDGs. 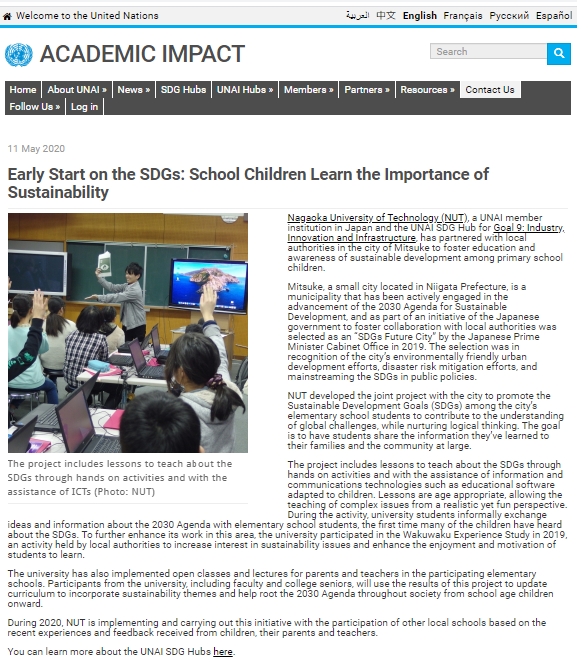