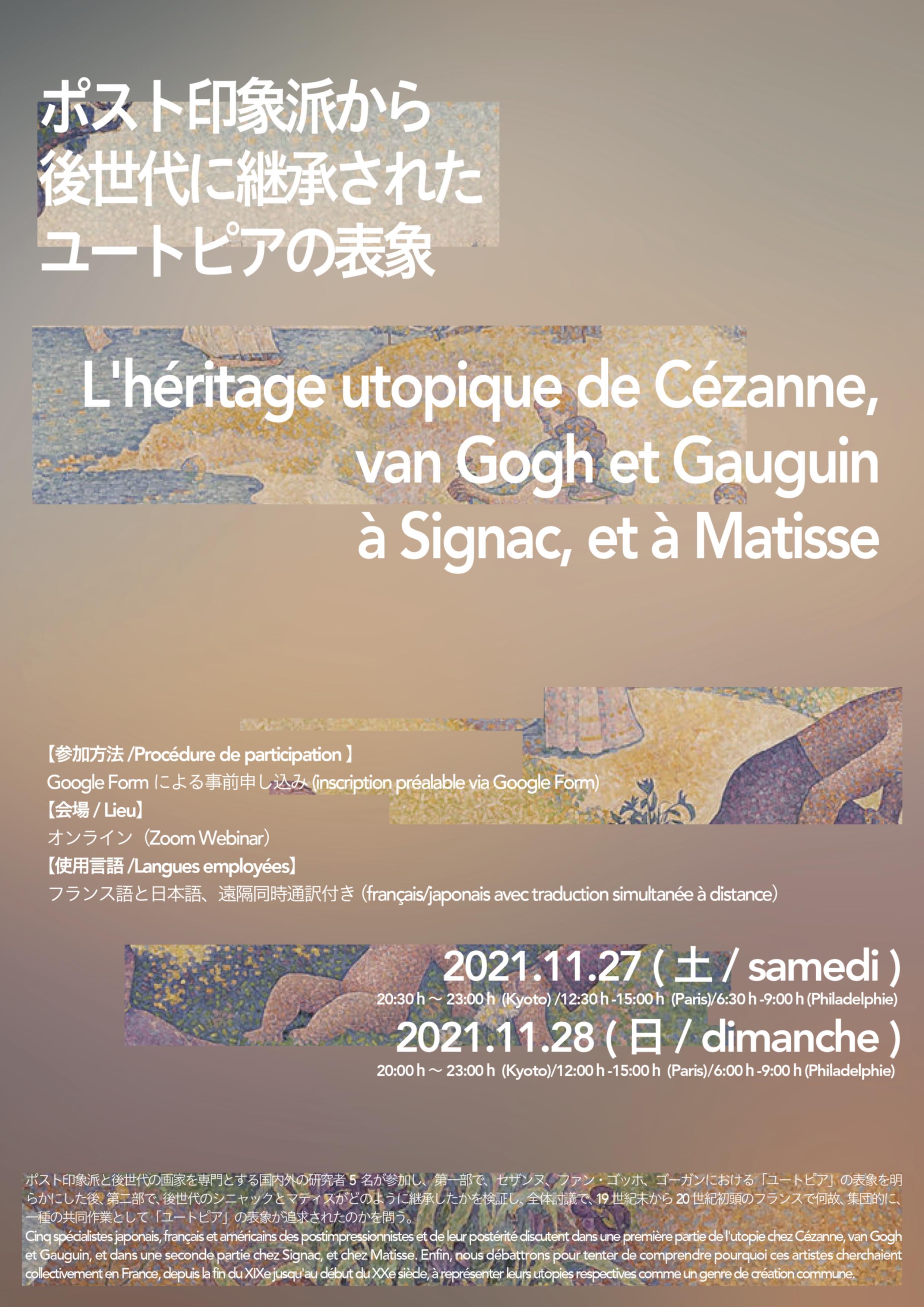 On November 27 and 28, 2021, Associate Professor Takanori Nagai's laboratory in the Department of Design and Architecture held an online symposium in collaboration with Société franco-japonaise d'art et d'archéologie (Japan-France Art Association), inviting five domestic and international researchers specializing in Post-Impressionism and later-generation painters as speakers. In the first part of the symposium on November 27 2021, he discussed about the representation of utopia in Cézanne, van Gogh, and Gauguin, and in the second part on November 28 2021, he examined how it was inherited by the later generations of Shanik and Matisse. The discussion was conclude with an attempt to understand why these artists collectively sought to express their respective utopias as a common genre of creation at the end of the nineteenth and beginning of the twentieth century.

The high level of the symposium, which was conducted with simultaneous interpretation in Japanese and French with researchers from abroad, connecting Kyoto, Paris and other countries online, was commented by many participants as a valuable and meaningful time. 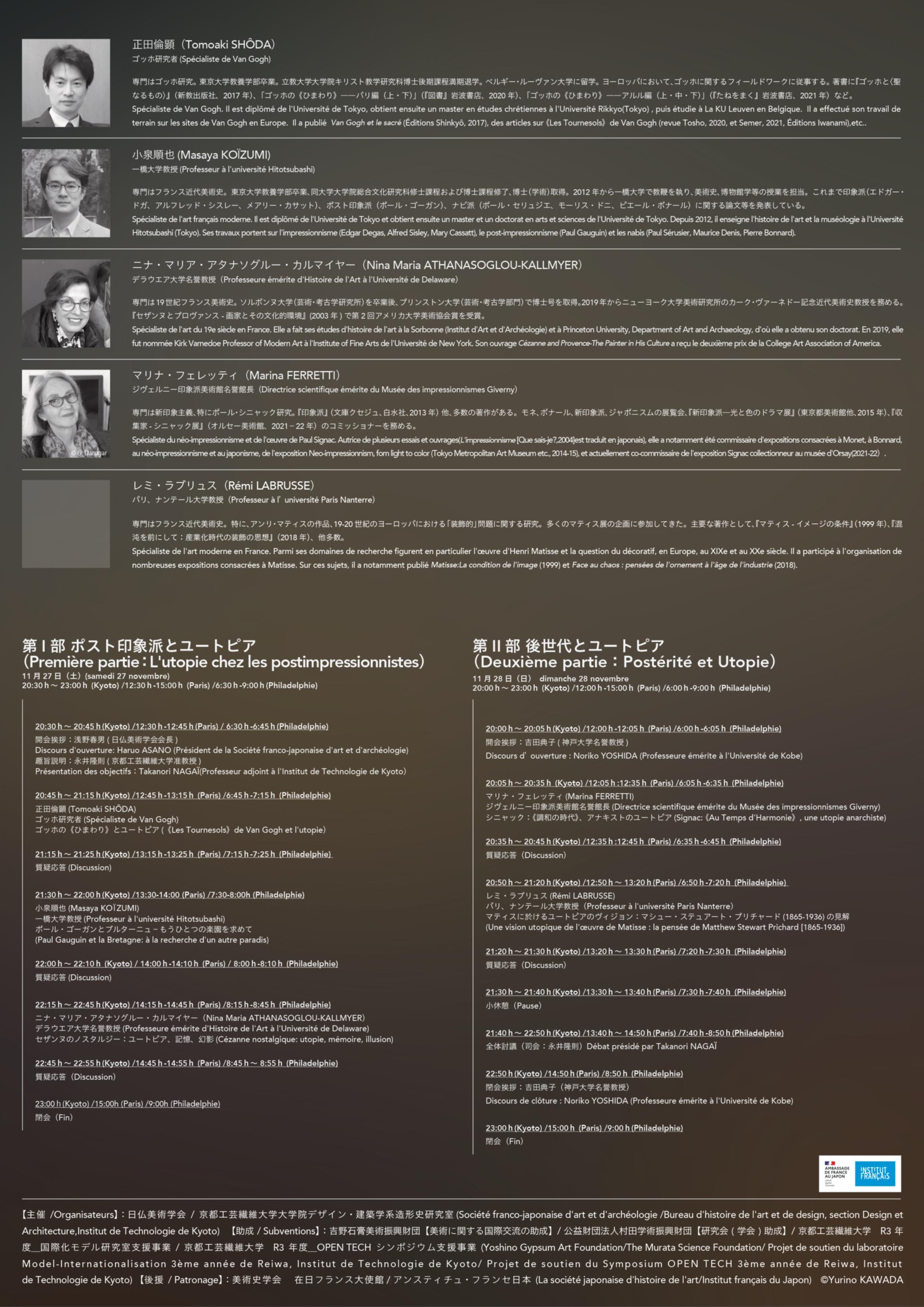 Tomoaki SHODA is a Van Gogh specialist who graduated from the University of Tokyo, obtained a master's degree in Christian studies at Rikkyo University (Tokyo), and then studied at the KU Leuven in Belgium. He did his fieldwork on Van Gogh's sites in Europe. He has published Van Gogh and the Sacred (Shinkyô Publishing, 2017), articles on 《the Sunflowers》 of Van Gogh (Tosho magazine, 2020, and Sowing, 2021, Iwanami Publishing),etc..

Masaya KOIZUMI graduated from the University of Tokyo and went on to earn a master's degree and a doctorate in arts and sciences from the University of Tokyo. He specializes modern French art. He has been teaching art history and museology at Hitotsubashi University (Tokyo)since 2012. His work focuses on Impressionism (Edgar Degas, Alfred Sisley, Mary Cassatt), Post-Impressionism (Paul Gauguin), and the Nabis (Paul Sérusier, Maurice Denis, Pierre Bonnard).

Nina ATHANASOGLOU-KALLMYER specializes in 19th-century French art history.She holds a B.A. from the Sorbonne (Institute of Art and Archaeology), a Ph.D. from Princeton University (Department of Art and Archaeology), and is Kirk Varned Memorial Professor of Modern Art History at the Institute of Fine Arts, New York University in 2019.Her book Cézanne and Provence-The Painter in His Culture received the second prize from the College Art Association of America.

Marina FERRETTI, Director Emeritus of the Musée des impressionnismes Giverny (Directrice scientifique émérite du Musée des impressionnismes Giverny). She specializes in neo-impressionism, especially in the study of Paul Signac, and is the author of many books, including Impressionism (Bunko Kuseju, Hakusuisha, 2013). She is the commissioner of the exhibitions of Monet, Bonnard, Neo-Impressionism and Japonisme at Giverny, Neo-Impressionism - Drama of Light and Color in Japan (Tokyo Metropolitan Art Museum and others, 2015), and The Collectors - Signac in Paris (Musée d'Orsay, 2021-22).

Remi LABRUSSE specializes in modern art in France. Her areas of research include in particular the work of Henri Matisse and the question of the decorative, in Europe, in the 19th and 20th centuries. She has participated in the organization of numerous exhibitions devoted to Matisse. She has notably published Matisse: La condition de l'image (1999) and Face au chaos: pensées de l'ornement à l'âge de l'industrie (2018).