GIGAKU Techno Park (GTP) at Mongolian University of Science and Technology, Mongolia has been successfully established

On March 2, 2015 (Mon.), we held the opening ceremony for GIGAKU Techno Park Mongolia Office, which was established at the Mongolian University of Science and Technology. The office is one important plan of NUT in the "Top Global University Project", in which Dr. Obikane, Presidentially-appointed Professor, is permanently stationed. The main purpose of the base is to provide support for students and teaching staff, including the Mongolian University of Science and Technology (MUST), who wish to start business ventures in Mongolia, as well as supporting practical education for students and aiming at launching business ventures in cooperation with local and Japanese companies and the two universities.

In the evening of the same day, we held a celebration for the opening of the base at Best Western Premier Tuushin Hotel located in Ulan Bator. About 40 people attended the celebration: government officials in Mongolia, including Mr. Gantumur, the Minister for Education and Science of Mongolia, the staff of the Japanese Embassy, including Mr. Yamamoto, the First Secretary of Japanese Embassy to Mongolia (acting ambassador for Mr. Shimizu, Japanese ambassador plenipotentiary), staff of MUST, including Dr. Baasandash, Vice President, Dr. Tsolmonbaatar, School Head of Mechanical and Transportation Engineering, staff of JICA, and persons involved in companies. At the celebration, the Minister Mr. Gantumur, Mr. Erkhembulgan Purevdorj, Chairman of the Higher Education Division, Ministry of Education and Science, Mr. Yamamoto, First Secretary, and Dr. Baasandash, Vice President, delivered congratulatory addresses. The participants enthusiastically exchanged opinions on the future development of the base that will be a bridge for exchange not only between universities, but also between Japan and Mongolia.

Taking this opportunity of the opening of GIGAKU Techno Park, we strengthen cooperation in further vitalization of industries in Mongolia as well as in a variety of fields, such as education and research in Japan and Mongolia. 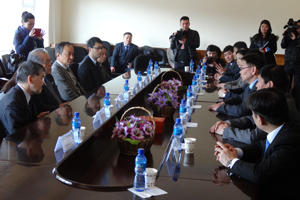 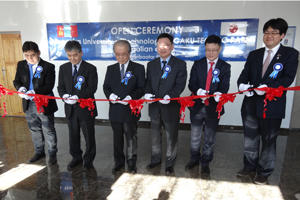 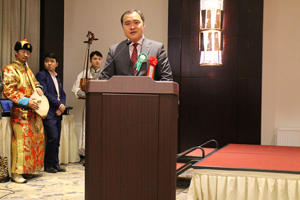 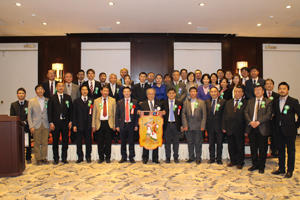 [(left) Mr. Gantumur, the Minister for Education and Science of Mongolia, delivering a congratulatory address, and (right) Group photograph]