This opening and signing ceremony was held at the lobby of Guanajuato Tecno Parque with more than 50 participants including representatives of communities of educational institute, business industry and journalism.

In particular, this was a greatly honorable opportunity for NUT, Guanajuato Tecno Parque, Universidad de Guanajuato, Organization of high school, and government of Guanajuato to receive a great deal of top managements from four Japanese companies, operating their business in these areas, while many Mexican companies also attended this opening ceremony and celebrate Opening of NUT's GTP.

From Mexican strategic counterparts, especially, Dr. Hector Plascencia Mora, Executive Director of Guanajuato Tecno Parque expressed, with special emotion, his strong expectation for development of new and innovative technology development which will give these region significant benefit, including not only technology innovation industries have been facing, but also stronger NEXUS among industry, academia and government over the Pacific Ocean.

In addition, the specific Agreement has been officially signed by Dr. Hector, and Dr. N. Azuma, Vice President/Executive Officer, NUT as effective on 6th of March, 2015.

With running the GIGAKU Educational Network and the GTP Network around the world to meet the challenge of turning out the next generation of innovators and entrepreneurs NUT will foster the Innovative Global Engineers. Practically, Eco-systems at GTP will be working with promoting exchange of students, young researchers, professors, and engineers among industries and universities in the international networks.

Thanks to this global network of GTP, we will be able to bring up Mexican and Japanese highly qualified engineers and develop the innovative industries in Mexico and Japan.

Dr. N. Azuma closed his speech with addressing in public that for achievement of our strategy, we need full support in linking different kind of actors in Mexico, as High Educational Institutions, Research Centres, affiliate companies, and government actors.

Finally, José Manuel Cabrera Sixto, Rector President of Universidad de Guanajuato delivered his warmhearted message to participants with explaining that setting up of GTP comes from constellation of super wisdoms, unceasing efforts, and the strong academic relations that has been established with NUT over 12 years.
During the Networking Coffee break, lots of business talks among top managements of Mexican and Japanese companies, educational institutes including top executives of the UD High School have been deeply and intensively developed.
Particularly, top management of Japanese companies appraised and evaluated highly NUT's GTP strategy because highly qualified engineers should be the major key point for sustainable management of a company. They gave us their appreciation to realization of networking for a human resources channel at GTP.
It seems that "Catalyzing technology commercialization, cultivating entrepreneurship through engineer education" as the function of GTP has commenced here.

Delegation of NUT officially visited two affiliated high schools of UG. In coming August, Mexican KOSEN-GIKADAI educational system will start under great assistance of NUT and KOSEN in Japan.
Without any doubt, this should meet Japanese's need to keep more highly educated and qualified innovative engineers. 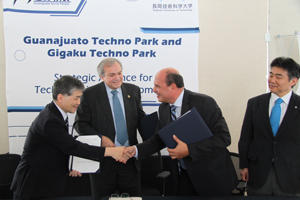 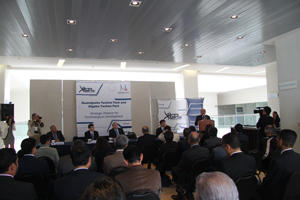 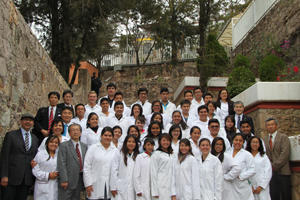 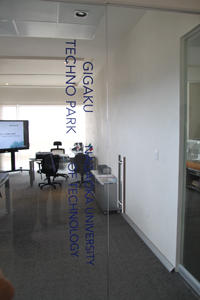