The opening ceremony for CU-NUT GIGAKU TECHNO PARK Office was held at Chulalongkorn University (CU) on October 22. The office was installed in the Department of Science at CU (on the 11th floor of Maha Vajirunbis Building) in cooperation between CU and Nagaoka University of Technology. It is the basis for joint administration and development of our industry-university collaboration activities in Thailand with CU.

On the day, in addition to Mr. Uchikawa, the Ambassador of Japan in Thailand and Ms. Kishida, e-Asia Special Program Coordinator, Japan Science and Technology Agency, many people attended from the organizations concerned, including Niigata-based local companies, and Japanese-owned and Thai companies. As people involved in the universities, teachers and staff, researchers, and students of both universities attended, including Dr. Mongkol, Vice President, and Dr. Polkit, Dean of Department of Science, from CU and President Dr. Azuma from NUT. It was an opening ceremony with a total of 80 attendants.

Ambassador Uchikawa made a congratulatory address as follows: "The embassy has set high value-added in industry, research and development, and human resources development as the policy objectives. The GIGAKU Techno Park strategies that Nagaoka University of Technology implements are in alignment with the policy objectives, which I highly appreciate." CU Vice President Dr. Mongkol addressed it as an historical event undertaken to strengthen exchanges between the two universities, and with the opening of CU-NUT GIGAKU TECHNO PARK as start, expected it to be a great deal of synergy leading to robust cooperation with CU.

In addition, the presidents of local subsidiaries of the two Niigata-based companies (Fukuda Corporation and Nippon Seiki), in which CU graduates have already been active, made presentations on their companies.

We strive to realize industry-university joint research in Thailand, and with CU-NUT GIGAKU TECHNO PARK Office as the base, promote more active exchanges and cooperation between students and researchers in the two countries. 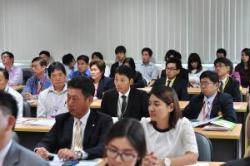 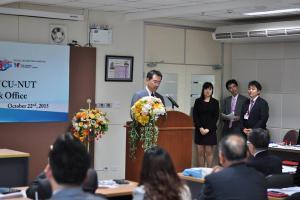 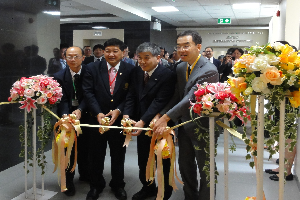 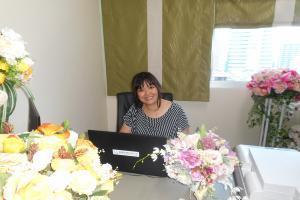