As part of United Nations 75th anniversary initiative (UN75), online dialogues were held together with academics, educators, researchers and students around the world, to discuss their priorities for the future, obstacles to achieving them, and the role of global cooperation in managing global issues.

"75 for UN75: 75 Minutes of Conversation" is been organized as a regular series and UNAI hosted a webinar on the theme "Rethinking Gender" on 19 June (Fri) 2020. This is for the 5th time, and UN women, experts, and university personnel were invited as a guest speaker. 19 June marked the opening of the very first World Conference on the Status of Women in Mexico City in 1975, and the start of worldwide dialogue on Gender Equality.

In this webinar, Dr. Mami KATSUMI, UEA (University Education Administrative) from Nagaoka University of Technology (NUT), delivered speech and introduced the current situation related to Gender equality in Japan and NUT's activities such as Gender and SDGs.

With the lead of Office for SDGs promotion together with Office for Gender equality, NUT will keep striving to achieve SDGs. 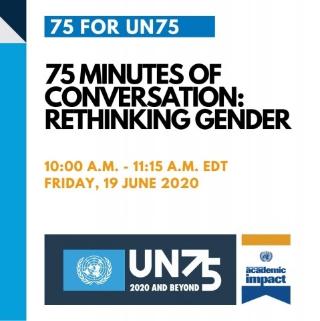