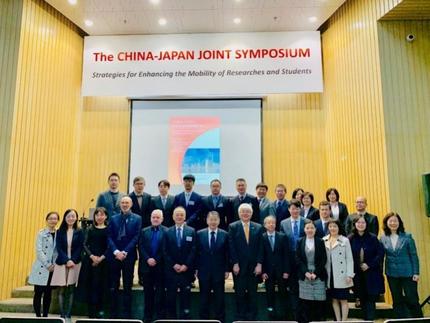 On March 25, Okayama University hosted a joint symposium in China with member universities of the Excellence League of China (Excellence 9, or "E9") in collaboration with the Six National Universities Network (SUN)/International Education & Research System (SixERS). This symposium was held as part of the "Top Global University Project," adopted by the Ministry of Education, Culture, Sports, Science and Technology.

The symposium was held at Tongji University, a member university of the E9. At the event, presentations were given by six faculty members of the six national universities in Japan and nine faculty members of the E9 member universities on various subjects, including the programs for receiving and dispatching students, exchange programs for researchers, and other advanced efforts of their organizations to increase mobility among students and researchers. The event was attended by 68 people, including faculty members and students of the SUN/SixERS and E9, and local students.

Representing Okayama University, MURATA Yoshiyuki, Director of the Center for Global Partnerships and Education (as of March 25, 2019), played a facilitator role at the session to discuss measures for increasing mobility among researchers. The session provided a good opportunity to share visions for the exchange of students and researchers between the two university networks of Japan and China, and to exchange concrete proposals for future exchange.

The Consortium of Six National Universities in Japan and E9 concluded an international exchange agreement on November 28, 2016. Since then, both networks have been promoting cooperation between the two. Commemorating the 40th anniversary of the conclusion of the Treaty of Peace and Friendship between Japan and the People's Republic of China, the two organizations signed the Awaji Island Declaration in November 2018 to further expand exchange. We will accelerate cooperation with E9 and other local universities to enhance the presence of Japanese universities worldwide. We also strive to invite more global students to study in Japan and promote the development of global human resources.