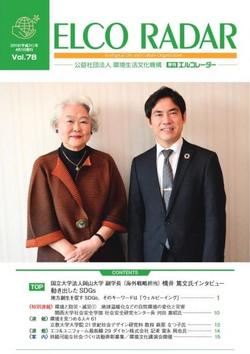 Okayama University has been vigorously addressing the issue of UN Sustainable Development Goals (SDGs), embraced as one of its management objectives under the flag of Makino Vision, raised by its president MAKINO Hirofumi. As part of such efforts, YOKOI Atsufumi, Vice President for Global Engagement Strategy, held a talk with Ms. HIRONAKA Wakako, an ex-member of the House of Councillors who served as the director general of the Environmental Agency. This talk was conducted to discuss the theme "Initiatives get going to achieve SDGs" for ELCO RADAR (Issue 78), a quarterly magazine published by the Ecological Life and Culture Organization, for which Ms. Hironaka works as the chair. 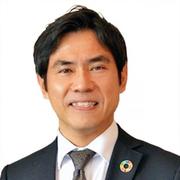 In the discussion, they talked about the historical backgrounds that led to the establishment of SDGs and the social circumstances of the time, as well as how Japan has been playing an active role in addressing the issue. Vice President Yokoi mentioned that "well-being" would be the key concept in regional revitalization in the future, based on efforts towards SDGs. He explained that young people in the generation who reached adulthood in the year 2000 and thereafter (millennial generation) and the following generations (Z generations) have a strong interest in social contribution and are eager to do something good for society. According to his analysis, this trend will make "well-being" the core concept in society, which aims to achieve overall happiness in terms of physical, spiritual, social, and economic aspects by considering various environmental and social conditions. He called for aggressive efforts by communities and start-ups in local regions to become the basis for realizing such a concept. He firmly recommended that these entities redesign their visions to ensure a healthy and truly affluent society by integrating SDG initiatives in their management framework.