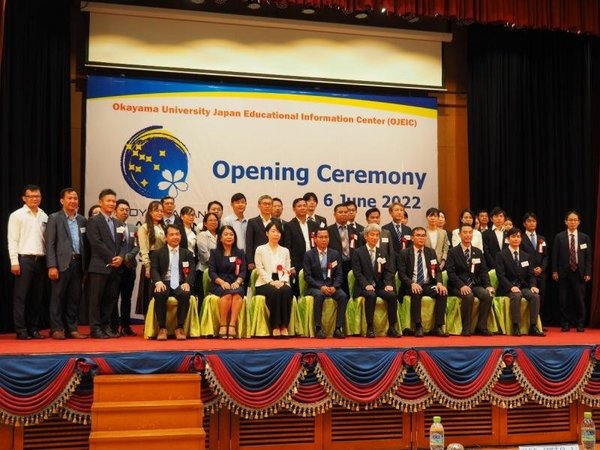 As part of its initiatives under the Study in Japan Global Network Project in ASEAN, Okayama University opened a Phnom Penh Office at the Cambodia-Japan Cooperation Center (CJCC), located in the Royal University of Phnom Penh (RUPP) campus on 1st March 2022. On 6th June, Okayama University held an opening ceremony and a total of 33 representatives from 15 Cambodian governmental and educational institutions attended, including Counselor KUBO Tomoko from the Embassy of Japan in Cambodia, Rector CHET Chealy from RUPP, and Director KHIM Leang from CJCC. Additionally, Okayama University representatives, Vice President for International Affairs SUZUKI Takayoshi and Associate Professor INAMORI Takao from the Institute of Global Human Resource Development were in attendance, while representatives from SixERS (Chiba University, Niigata University, Kanazawa University, Nagasaki University, and Kumamoto University), which is a partner institution of this project, joined online.

In her congratulatory address, Counselor KUBO Tomoko expressed her expectations for the office, saying, "The support provided by the Phnom Penh Office will help many Cambodian students who wish to study in Japan to realize their dreams. The Embassy will work closely with the Phnom Penh Office to provide them with the necessary support". Then, RUPP Rector CHET Chealy, who has personal experience studying in Japan, expressed his desire to cooperate with the office, saying, "We would like to extend every possible support so that the Phnom Penh Office can carry out its mission smoothly. We believe that promoting studying in Japan opportunities will not only help students acquire the relevant knowledge but also strengthen the friendship between Cambodia and Japan."

In the afternoon on the same day, Okayama University held a Study in Japan Seminar jointly with SixERS partner universities in a hybrid style that includes face-to-face and online. A total of 154 participants including prospective students joined the seminar, and it became a perfect opportunity to commemorate the opening of the Phnom Penh Office. At the seminar, Cambodian students currently studying in Japan and faculty members from each partner university took the stage to introduce their respective universities and elaborate on the appeal of studying in Japan. Representing Okayama University, Vice President Suzuki introduced the university and gave a mock lecture, while Study in Japan Coordinator NII Yusuke introduced the Phnom Penh Office and the project.

The Phnom Penh Office is committed to cooperating with universities, educational institutions, and alumni associations to support Cambodian students who wish to study in Japan.


〇 What is Study in Japan Global Network Project in ASEAN? 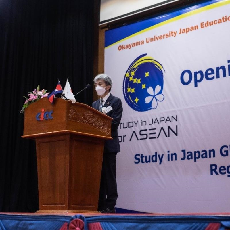 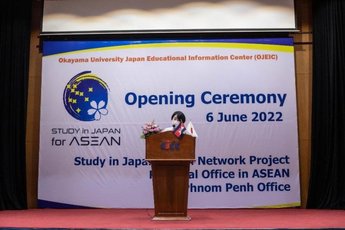 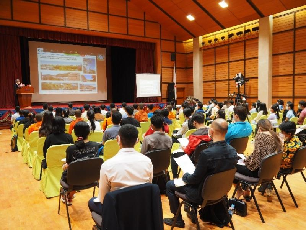